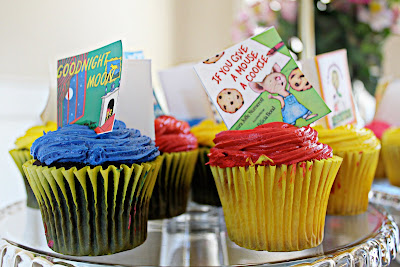 On the Saturday of MLK Weekend, my sister hosted a storybook-themed baby shower for her sister-in-law, Erica. Erica also happens to be one of my good friends from high school, and we would always joke around and say "Hey sister!" in the hallway since her older brother and my older sister were destined to be married one day (and they did, obviously, get married!). Now Erica is expecting her first baby in February, a sweet baby girl she and her husband have named Annabeth. Here are some of my favorite pictures from the shower! 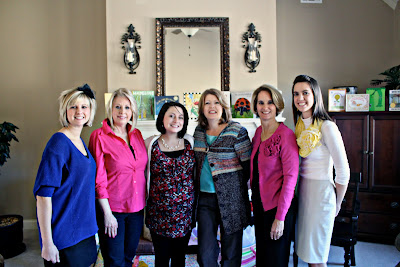 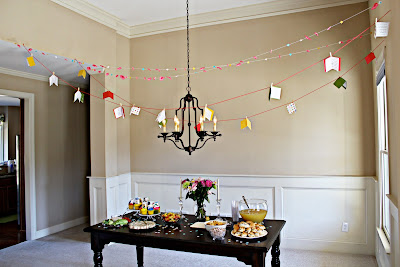 Ashley made the cutest banners to hang over the food table to go along with the book shower theme. It looks like she just took a mixture of solid color and patterned scrapbook paper, folded it in half, glued a piece of paper with words to the inside to make it look like a mini-book, and hung it from the string with little clothespins. So cute and fitting! 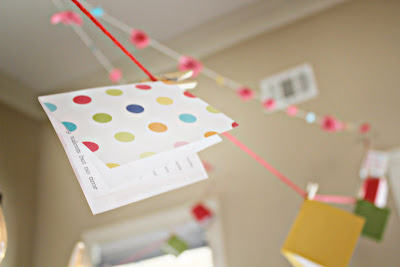 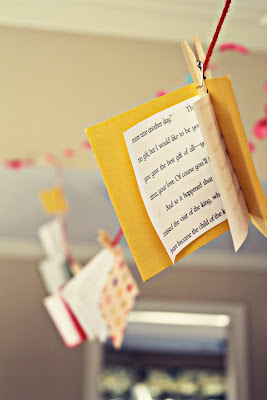 As is the case with most showers, the food was delicious. And also the case with most showers, the guests either were being shy or weren't that hungry, so there were plenty of leftovers to go around! If we're being honest, that's one of my favorite things about helping to host a shower, leftover shower food. :) So here are a few of the things we had: 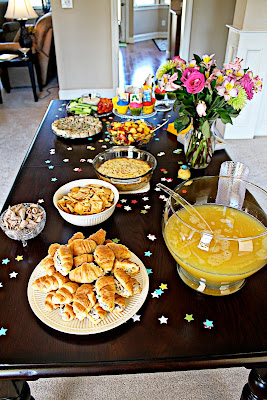 Ashley's creativity strikes again! She made these book cupcake toppers herself. 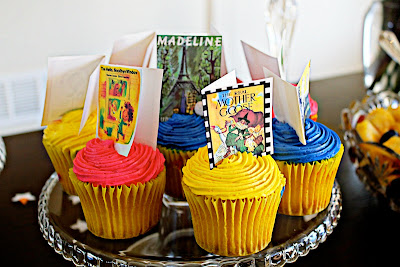 Erica's mom made her famous spinach pinwheel sandwiches, and I don't refer to them as "famous" for nothin'! The feta cheese (or is it goat cheese?) makes them creamy and delicious, and the little bits of jalapeno pack quite the unexpected punch. I am dying to get the recipe from her! 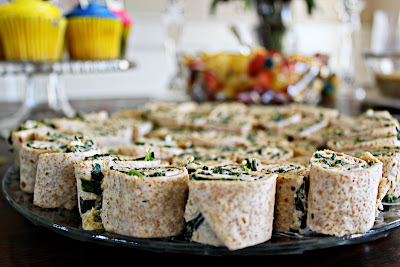 My mom made the punch, which I probably drank too much of and will now develop diabetes from it. It was so good! 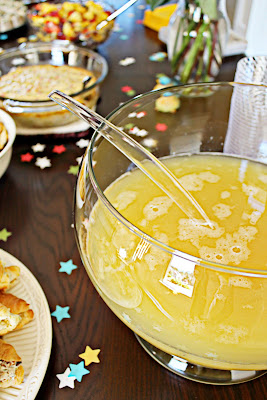 Moving in to the living room where Erica opened her gifts, Ashley continued the book theme by displaying children's books on the mantle and on top of the media cabinet. Most of these books came from her kindergarten classroom, so this was the perfect shower theme for her to choose. She was already loaded up on supplies! 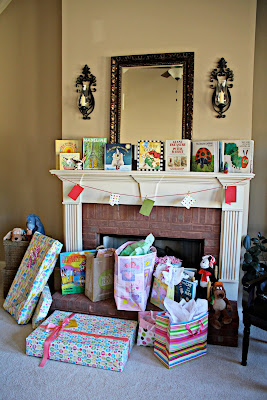 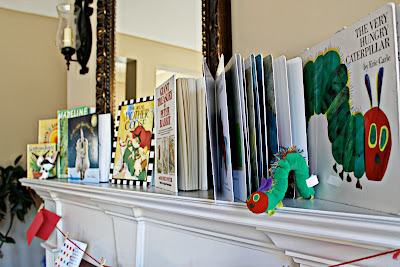 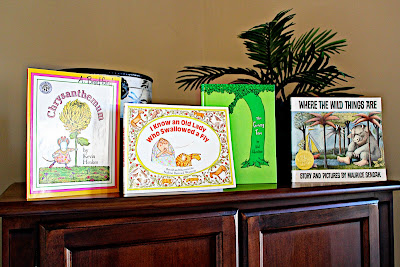 Ashley also had stuffed animals from popular children's stories spread throughout the seating area, which was fun for the kids who attended the shower. 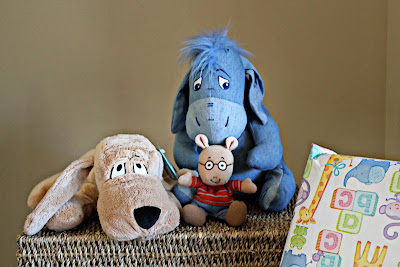 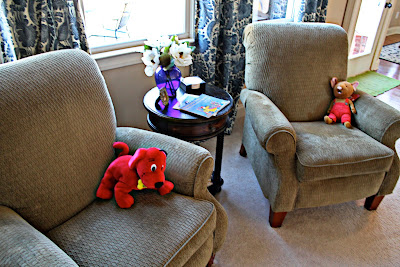 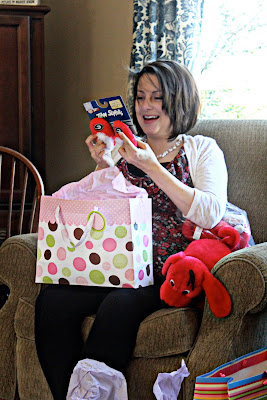 This shirt for her husband, Ryan, to wear at the hospital that says "Anyone can be a Father, but it takes someone special to be Annabeth's Dad!" 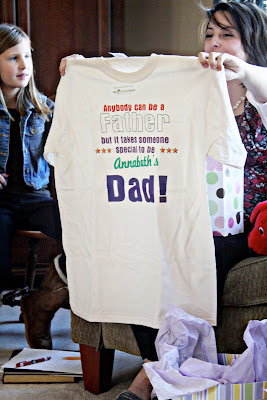 Goodnight Moon, my absolute favorite children's book. My mom did such a good job reading this to us when we were little! 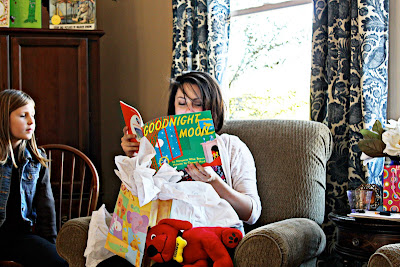 I was so obsessed with Erica's diaper bag! Anything with yellow on it, sign me up! 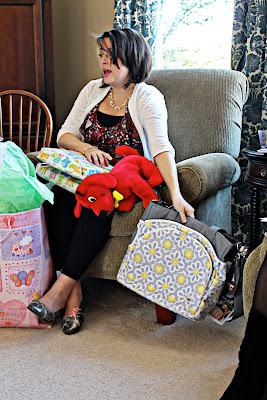 And finally, I loved this monogrammed onesie with ruffles on the back. Too too cute! 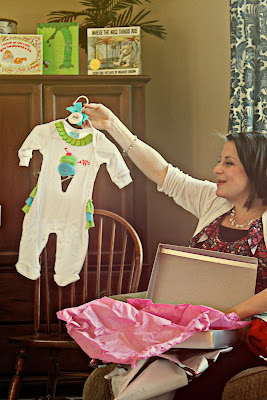 Ashley did such a great job as hostess, writing down all the gifts for Erica to send out thank you cards and coming up with fun games for us to play, but I think the real star of the show was Brody, her miniature schnauzer. The little kids absolutely loved him! 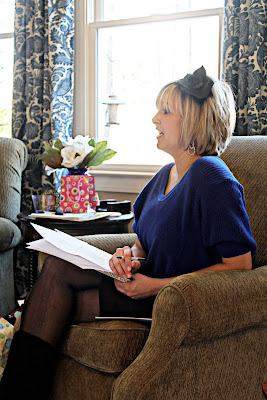 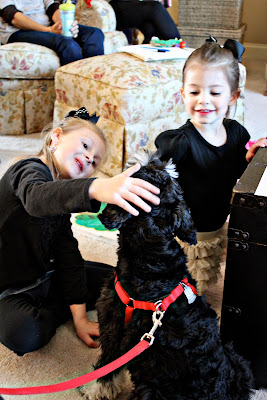 By the end of the afternoon, I think we were all ready to pass out like this cutie. 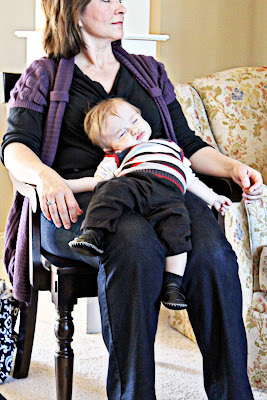 To wrap up the shower theme nicely, Ashley made chocolate chip cookie favors for everyone to go along with the story If You Give A Mouse A Cookie. She took pride in the fact that she came up with that herself, and didn't find it on Pinterest! Gotta savor those moments! ;) 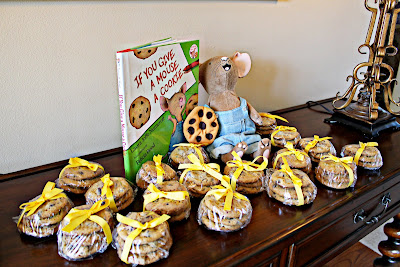 Have any of y'all attended a baby shower lately? It seems like all the girls I know are preggo right now!
Posted by Lesley Anne at 12:30 PM

Lesley Anne
Redeemed by grace. Wife to Kyle. Mama to Gabe. Project Manager. In love with books, home, and large cups of coffee. My desire for this space is to encourage moms and to make much of Jesus. I’m so glad you’re here!